Tim Brando is terrible at his job. See, I get, at a huge win, it’s not easy to create a story that is engaging for the general audience as one man played after another.

But here’s the thing: What was happening on the field was amazing. The sports on display in Ohio State were amazing, especially in terms of attacking, and it shouldn’t take a genius to figure out how to translate that into TV magic. Instead, Brando often missed calls, misspelled names, reacted sluggishly to major substitutions, and generally vaguely praised Ohio State that (as always) showed a lack of preparation and research.

Which is a shame, because the game was fun as hell and worth a million percent to watch and understand. Too bad the main man in the booth was too lazy to introduce it.

Try to live by your standards https://t.co/kr7duUfv5y

I love this baby Hayden has a little juice for him

I can’t say that enough. But college football is great.

Really glad that Ohio State University is gaining experience for this style of QB. He will help them later in the season for sure

Teves with!! Through legs.. back back back… gold pic.twitter.com/TilNUdGp1G

How was all of these things taken at exactly the same time???

Quad scenario Ohio in the first half. pic.twitter.com/8Q897GHtBs

“I wouldn’t say we’ve reached our full potential yet,” he said. “We’ll shake a few things here and there, but we’ll be fine.”

Ohio State finished the game with 762 yards of attack, ranking second in the school’s history.

TC Caffey records a drop. His colleagues have a great time celebrating him. pic.twitter.com/h1eJw169MN

Welcome to our town, to our playground, our history. Take a look at this tribute to some of our greatest running appearances as part of tonight’s premiere. Link to the full presentation below. #GoBucks

We were noisy, bird pic.twitter.com/zI5VlGTKGS

Did…Did RJ Day just grab a little kid who snuck into the midfield and pushed him to the sideline?

You will do that for this week. Next up: Wisconsin, in a match between two offensive powers, apparently? Weird, but fun! 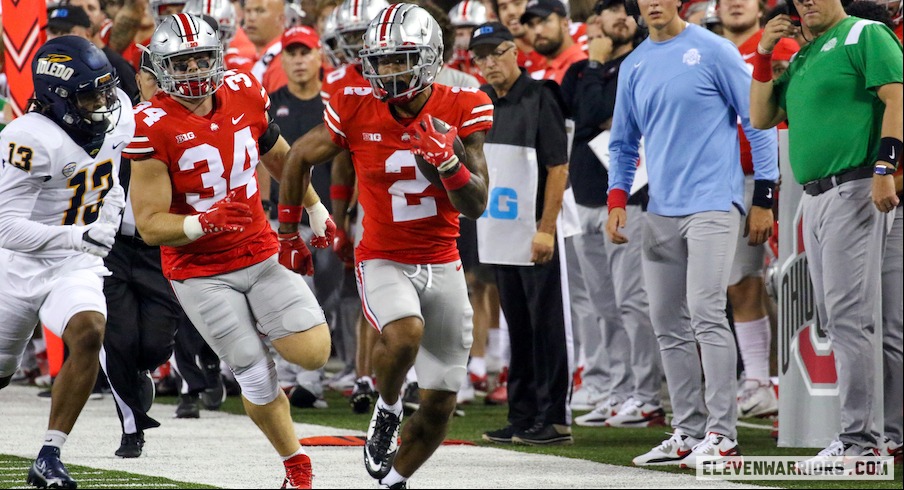