AWS-backed GT America hit the Sebring runway for the second time on Sunday afternoon, the last race before the two-race showdown at Indianapolis Motor Speedway in just two weeks. After a mostly smooth run of the race that quickly turned dramatic at the end, the second race was an opportunity for many of the racers to either make up for lost ground, get a slight hand in the points, or a little bit of both, especially in the GT4 arena. The yellow flag never flew – this was an all-green battle.

Although George Kurtz (No. 04 CrowdStrike Racing by Riley Motorsports Mercedes-AMG GT3) won the championship after the first race yesterday, the stadium is still just as excited as ever. Kurtz drove from the start on Jason Harward (#88 Zelus Motorsports Lamborghini Huracan GT3). The two were sparkling in the first half of the race, rarely separated by a few car lengths.

At the 20-minute mark, Harward had a solid run on Kurtz in traffic and jumped forward through Turn 1. After watching these two compete mercilessly yesterday, it was a momentous occasion, especially given Sebring’s underhanded corner relay.

Twelve minutes later, Harward went a little too far and a little hot in the last corner, and opened the door for Kurtz. The Mercedes-AMG driver managed to take the lead and regain the lead. The gap continued to widen in the final laps, giving Kurtz an easy win – his eighth of the season – and a sweeping weekend overall. The new champ also earned a CrowdStrike Fastest Lap by setting a lap time of 2m02.035s.

Behind Kurtz and Harward, Mirko Schultes (No. 70 Mishumotors Callaway Corvette C7.R) quickly climbed into third and stayed there for the rest of the race, and Jason Daskalos (No. 27 Daskalos Racing Audi R8 LMS) unfortunately suffered more mechanical issues that led to the DNF.

After Kurtz across the line were Harward and Schultis, an identical platform for Saturday afternoon’s race.

While the championship’s top spot is sealed with Kurtz winning the title, how he will fill the rest of the podium is still unknown. The battle for second place is close between Daskalos, Harward, and Schultis with a margin of just 21 points, and 50 points in Indy. 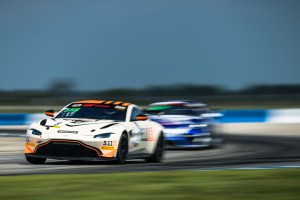 After a turbulent end to Saturday’s GT4 race – all centered around mechanical issues and running out of fuel – the field ran through the 40 minutes without any problem, despite plenty of entertaining action and skilful driving.

The biggest event happened almost instantly: On the first lap of Turn 1, Jason Bell (#2 GMG Racing Aston Martin Vantage AMR GT4) swung inward and, despite the massive scramble in the early race, jumped two positions to second and held onto him for the entire race. He also almost took the lead from Elias Sabo (#8 Flying Lizard Motorsport Aston Martin Vantage AMR GT4), but Sabo had a better streak in the next two corners, which assured him to maintain the lead throughout the race.

There was enough real estate between Sabo and Bell, as well as a comfortable space behind the Bell, to cement their positions early on. In the back, the battle was between Adam Adelson (#120 Premier Racing Porsche 718 Cayman GT4 RS Clubsport) and Moisey Uretsky (#55 performance accelerator Aston Martin Vantage AMR GT4). Adelson jumped forward from his seventh position, while Uretsky slipped three positions from his position. Both drivers really wanted to grab the last place on the podium and the three extra championship points it gave. At this point in the season, with how close the GT4 Championship was right before Indy, every single point counts.

Behind the Adelson-Uretsky junk, and off their fenders were Marko Radisic (No. 427 SRQ Motorsport BMW M4 GT4), Seth Lucas (No. 016 Hattori Motorsports Toyota GR Supra GT4) — who jumped three places over the course of the race —Bryan Putt (No. 15 at BSport Racing Aston Martin Vantage AMR GT4) and Robb Holland (No. 99 Rotek Racing Porsche 718 Cayman GT4 RS Clubsport), have all had a feud of their own.

In the end, Sabo crossed the line first, followed by Bill and Adelson. Sabo became the ninth winner out of 14 races.

“Man, it’s just straightforward cheer,” Sabo said of the feeling of his victory. “The team once again gave me the best car on the track. I can’t say enough about Owen Hayes and what he does from an engineering point of view – first ever win in an SRO, it feels great.”

The championship points chase is still very close with Bale reclaiming the lead by a slim two-point lead over Adelson 152-150, followed by Uretsky, Chouest and Holland. From first to fifth, a difference of only 25 points. The margin is closer when the “downside” factor is added. Every GT4 driver will lose their worst weekend of the year. The total of the adjusted dips put Bell and Adelson on par at 146 with the gap narrowing from 1st to 5th to just 19 points. This fight won’t be resolved until AWS-powered GT America wraps up the season in two weeks, October 7-9, at Indianapolis Motor Speedway.