How F1 helicopter footage has been raised to a higher level

The first free practice of the French Grand Prix just ended when we were invited to Paul Ricard Airport. The man we met was Belgian Levin Hermanns, who started working as an aerial camera operator for Formula 1 in 2007.

In one of the hangars there is a helicopter with an impressive camera system installed under it. Next to the pilot’s seat, the other front seat inside the cockpit has been modified to accommodate a large console containing a joystick and a respectable number of buttons and switches that Hermanns uses to operate the Shotover F1 camera, which he can monitor on the screen in front of him.

“Before I started in F1, a colleague of mine raced in Formula 1. At that time Formula 1 production was about five, six or seven races a year. Local TV stations still run all the other races.

“I replaced my teammate once, followed again, and before I knew it I was the normal F1 air cam operator. Then the number of races increased rapidly to about 13 races a season, and has only grown since then.” 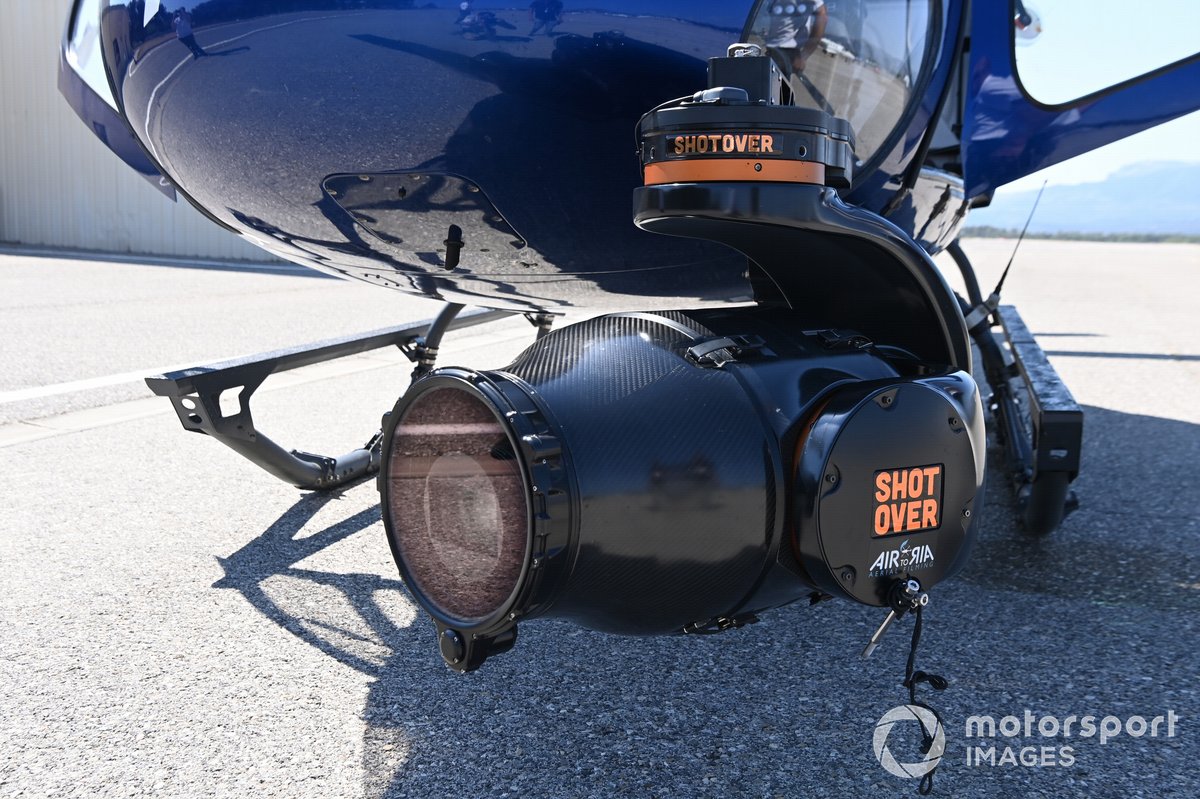 Gone are the days of helicopter cameras chasing the leaders around them. In the hands of Hermanns, F1’s aerial camera has been instrumental in making the broadcast more dynamic and bringing fans – literally – closer to the action.

“In the past, the aerial camera was only used to follow drivers in the front,” Hermans says. “I stayed above them like a bodyguard, not to miss an important moment in the race.

“But now we’ve shown that you can do a lot more. You can make more dynamic shots by flying lower and playing with the foreground and background, which increases speed in everything. And that’s how we’ve improved year after year. The images we’ve been able to produce now, In my opinion, much better compared to what was accomplished fourteen years ago.”

Working with a rotating crew of pilots

For Hermans, the Grand Prix weekend begins on Thursday. “Thursday is the day of preparation for us. We start in the morning by checking the equipment, locating the helicopter and installing everything.

“There is also a lot of protocol involved, so we have a lot of meetings. Sometimes it takes a few hours before we finish shaking hands and finally get to the helicopter.

“Then we install the camera and go out on a test ride. We look at the first pictures and try to remember how we did things in previous years.

“On Friday, the production schedule begins, so we cover all the F1 sessions. Of course, we arrive on time every day to check the camera and the helicopter again and brief the pilot. Then we get the helicopter out of the hangar and start working.”

“There was a time when we worked with the same helicopter and the same pilot inside Europe, but this is expensive and with the need to reduce CO2 emissions it has also become a difficult story.

“But because we return to the same places every year, we now have a group of pilots that we hire every year. This means that most of the pilots we work with have some experience.

“It also happens sometimes that you have a pilot next to you who has absolutely no experience with aerial photography. Then you really have to start with the basics and sometimes explain some maneuvers. Then it is really important that we grow step by step over the weekend.”

“The advantage is that we cover every session in Formula 1, so we have two hours on Friday and one hour on Saturday to get used to each other. By qualifying, but certainly by racing, the cooperation is guaranteed.”

A good understanding with the pilot is the key to presenting the correct images. “Sure,” Hermans replied. “The pilot makes roughly 50 percent of the end result. It’s definitely a team job. It’s important that they feel what I’m doing and see what I’m doing, as there’s no time to explain everything.”

“They also have a screen so they can see the images we make. Some pilots have more experience flying and looking at this than others. But they really watch the footage and fly with it, they are fully involved in the rhythm and the patterns. If they don’t follow what I’m trying to do or They don’t understand what I want, things get very difficult.”

If there’s almost no cockpit talk by Sunday, that’s a good sign.

“There are pilots to whom I don’t need to say anything on Sunday, because we get along so well with each other. If I say I want to do a long one-car throw, the pilot knows right away what to do.

“Of course, you often come across different scenarios that you can’t rehearse in advance, but in general, the less communication on Sunday, the better.”

Naturally, Hermans prefer pictorial trails located in hilly or mountainous regions, such as the Red Bull Ring in Austria and Spa-Francorchamps in Belgium. “It’s more fun for me because you can play more with the foreground and background, and with a different length. In that regard, I also really liked Portimao. I think they should put that back on the calendar. I’ll say [F1 CEO] Stefano Domenicali that next time I see him! “

Integrated circuits are also fun to work with. “Because then you can go from one side of the track to the other more easily. Circuits like Jeddah and Baku are very tricky in that regard, because they are basically one long, extended line. You can’t cut a corner to pick up a car at the bottom of the lap. If it was The car is in a certain corner and you’re on the other side, you have to cross the entire track, which can take some time. But at a circuit like Red Bull, you can go to the other side of the track in no time.”

With F1 pushing for more street racing, urban environments such as skyscrapers and other obstacles can make the helicopter crew’s job very challenging.

“In Singapore we have buildings right next to the track. It’s challenging not only because it’s a long and fast track, but also because there are a lot of tall buildings and cranes on the surrounding towers,” Hermanns adds.

“And what often happens at Silverstone is you suddenly come across a helicopter carrying tourists, so you can’t do exactly what you have in mind.

“You can pin a particular shot ten times in a row, but if the eleventh isn’t perfect for any reason and that moment ends feeding the world, that’s really frustrating, as we strive for perfection.”

There are a lot of variables involved in chasing the perfect shot – like flying in general – the weather is probably the most important aspect.

“There are really countless factors and they all have to work together to get that perfect shot,” Hermans says. “The weather is definitely a major factor, because we often have bad weather. Just think of the spa last year. I think that was the worst I’ve ever been in F1 and it kept raining, but there was also a lot of fog.

“And because the resort has so much elevation and conditions in the Ardennes can change very quickly, the visibility can be perfect at one moment but you can’t see it at all. Then we got to the point where we said: Now it’s not okay to work.”

While a lack of visibility can lead to dangerous conditions, the aerial camera is well equipped to handle rain. “We currently have a rain spinner over the camera system, which is a glass cover with a motor below. The glass spins at an amazing speed, a few thousand revolutions per minute, making water droplets fly off.

“This allows us to perfectly shoot through the rain, which is a huge difference from the photos we are used to seeing. There are times when I can now see through the camera better than the window of a helicopter.” 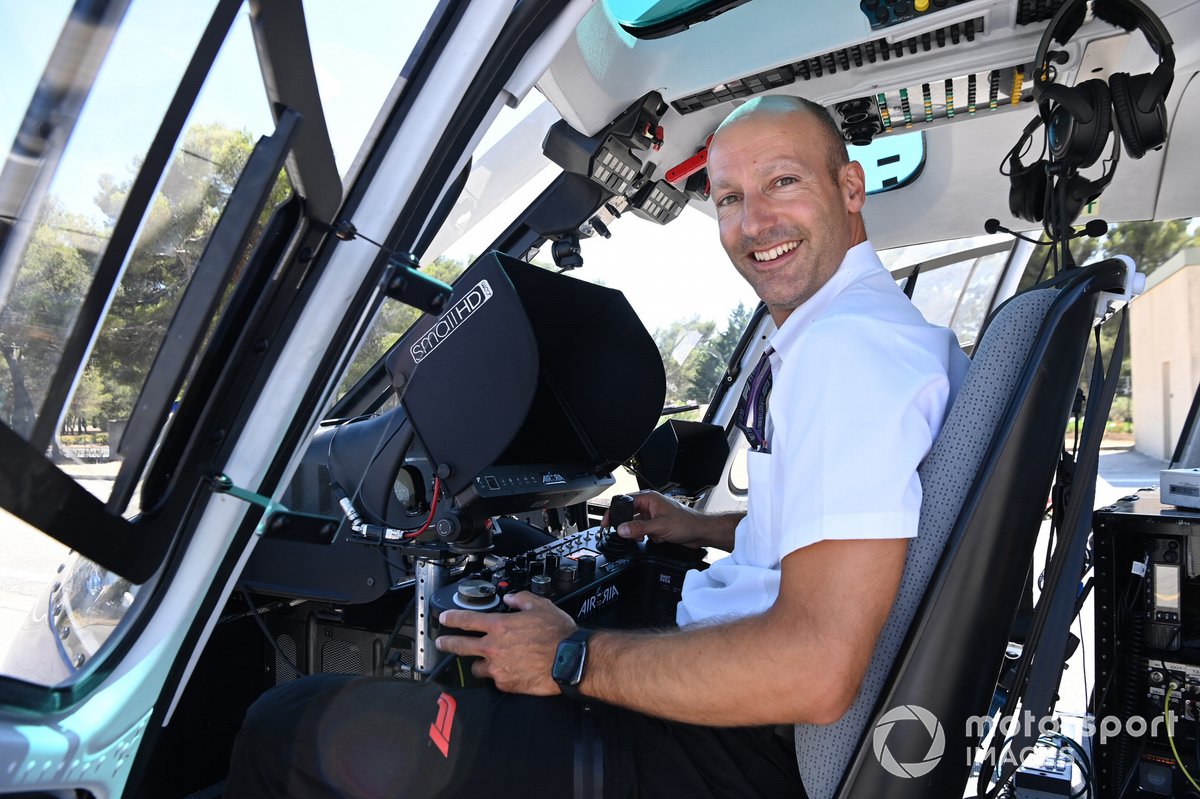 It’s not just the helicopter crew that needs the gel. If the crew wants to have any chance of capturing the most important moments of the race, it also needs to have good communication with the television crew on the ground to understand what is happening on the track. And with the delay involved in positioning the helicopter to capture the next big moment, Hermanns must be able to look ahead.

“I’m in constant contact with the TV director and there’s a producer talking to me,” Hermans explains.

“I can look outside, but of course I miss the racing overview one has on the ground, with all the graphs and data. However, I always have the F1 app open and can sometimes follow the action on the trackside screens. So I collected a lot of sources Information and then I filter what is important to us in the helicopter.

“I might hear they’re following a particular fight, but if the action takes place on the other side of the track, there’s a good chance that by the time we get there or the cars reach us, they’re talking about something completely different. So, it’s important to have an idea of Where the story might go and what the next story might be, not act on what is happening at that particular moment.”

Hermanns is well aware that he has the best seat in the house, and while he may focus on getting the perfect shot, he can still enjoy the sport.

When asked if any fights he has filmed stand out for him, the 2021 Abu Dhabi Grand Prix comes in. But not for the reasons you might think.

“In Abu Dhabi we actually have to go back a couple of laps before the finish to catch the fireworks from a distance. But I was so absorbed in what was going on and then I suddenly realized: Oh, this is already the last lap but we were still hanging over the track! Then we made sure to get out! From there very quickly…”

Formula 1 is constantly looking for new ways to boost its TV coverage, including experiences with helmet and pedal cameras. In Barcelona this year, FOM first tested shooting with drones. With F1 aiming to be carbon-neutral by 2030, drones may be a cheaper and more environmentally friendly way to capture aerial shots, but Hermann isn’t afraid his job will move from the cockpit to the office anytime soon.

“I think there is definitely a future for drones, but I don’t agree with the idea that it will take over the helicopter camera business,” Hermans says.

“I would prefer to see it something complementary. From my point of view, a drone could be used as an extension of the camera lever. You can land on the ground instead of a helicopter and play more in the foreground. But I think a helicopter is better at giving a larger overview and providing more dynamics and speed to the images.”

“So, I don’t feel the immediate threat from that. On the contrary, I think we can work perfectly in tandem. We are both in touch with the producer, who can switch from a drone to a helicopter and back. There is no need for a conflict there.”